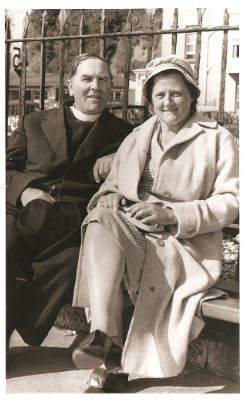 1950 was the centenary year of the present church.  The church was re-decorated, and was treated for death watch beetle, traces of which had been found in the roof and the flooring.  The Bishop of Salisbury, the Right Reverend Dr. Anderson, preached at evensong in October as part of the centenary celebrations.  It was the first year of a decade which seems to have been a high tide in church affairs.  The Reverend Frank McGowan had been Rector since 1924.  He had now become the Venerable Archdeacon of Sarum but remained Rector until 1955.  The village school at the entrance to the church yard flourished, and so did the village shop and post office at the bottom of Church Lane.  The People’s Warden throughout the decade was Air Commodore Andrew Walser of Cholderton House, who had married into the Stephens Family and who was a staunch supporter of the church until his death in 1966 when he was buried in the family mausoleum.  In 1957 Lord Marchwood, at the Manor became the Rector’s Warden, and Lady Marchwood became a foundation manager of the school.  The church was very much the centre of the village affairs.

In 1955 when Rev'd Bryan Bishop and his wife Bess arrived
​there were 47 names on the church electoral roll.  By 1960 the numbers had increased to 84.  This was due to two events.  One was the Representation of the Laity measure of 1956 which lowered the age limit for inclusion on the roll from 18 to 17 to encourage young people to take an active part in the life of the church.  It also permitted a person to have his name entered on two rolls in the same diocese, with the consent of the Parochial Church Councils concerned.
The other event was the extension of the church parish across the county boundary into Hampshire under an order in Council dated the 21st June 1955.  The Diocesan authorities of Winchester and Salisbury were at the time discussing the rearrangement of the parish boundaries adjacent to county borders.  Cholderton PCC maintained that the occupants of Park House and the neighbouring habitations had always been cared for by the Rector of Cholderton, and their children attended the Cholderton Aided School (No. 3320), whereas the Shipton Bellinger parish school was further away and was not a parochial school.  The PCC’s case was accepted, and later, in 1960, the ecclesiastical boundary was further extended to include Thruxton Farm and dwellings on the Grately Road.
The boundary changes increased the adult population of the parish from about 160, which had prevailed since the 1830’s to over 200.  However in 1987 there was another review of boundaries, this time by the Local Government Boundary Commission for England.  Both Salisbury District Council and Cholderton Parish Meeting recommended that the civic parish boundary of Cholderton should be extended to coincide with the ecclesiastical one because Cholderton village was the focal point of the area and electors living on the Hampshire side looked upon Cholderton as their village.  The review body felt that was insufficient justification, in terms of effective and convenient local government, for it to happen, so the anomaly has remained.

'POP-IN'at St Michael's Church.
St.Michael's cordially invites children, parents/carers and anyone to POP-IN to the Church for tea/coffee/squash and biscuits for a time to relax and chat together with friends, and making new ones! on Tuesdays from 2.30 onwards during term time.
We  have a free lending library for adults and children along with an activity table with lots of different things to do ie colouring, gluing, cutting out, play dough, threading, collage and making craft.
We now also have a large display board making it much easier for the children to see their work and for all to enjoy.
Such a fun time for everyone,so please come and join  us in this new adventure for us all.