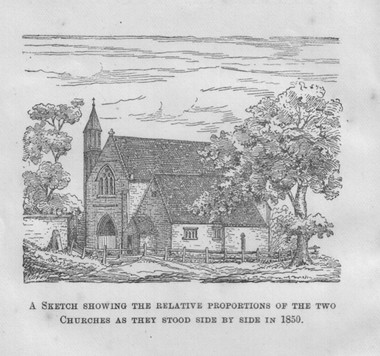 Click to enlarge
​The original church was given by the prior and monks of St Neot's, Huntingdonshire about 1175. Patronage of the living remained with the Priory until it passed into secular hands in 1449. In 1693 it passed to Oriel College, Oxford.
The present church of St Nicholas was built between 1841 and 1850 at the instigation of the then Rector, the Rev'd Thomas Mozley, a fellow of Oriel College, who arrived in Cholderton as Rector in 1836. The new church was consecrated in 1850.
It cost over £6000 out of which Mozley had to find over £5000 himself through he and his wife writing articles and publishing books. No financial support at all was forthcoming from the local community.
The struggle to finance and complete the church caused Mozley to resign, to be replaced in 1847 by Revd James Frazer, who later became Bishop of Manchester. continued to pay for the completion of the church up to its consecration. It took another ten years for Frazer to contribute and install the stained glass windows some of which commemorate members of his family.

The old church, built in the 12th century measured 40 feet 2 inches.
The exterior of St Nicholas strongly reflects the architectural style of a college chapel in that it is tall, unaisled and without a break to mark any internal divisions. On entering the impression is reinforced by the stone screen separating the building into chapel and ante-chapel at the level of the first bay.
Sited alongside the previous 12th Century church the new building is twice as long and twice as high and was built to fit a medieval hammerbeam roof which Mozley had acquired from Suffolk. The roof was originally from an Augustinian monastery used later by a Guild of Cloth Workers who carved their Sign of Shears on some of the roof braces.

The floor tiles specially made by Minton were considered so exceptional that the entire design was shown at the Great Exhibition of 1851. The tile with the royal coat of arms in the ante-chapel is as used in the House of Lords in London.
The pew ends, all different, represent the Fruits of the Earth and were carved by craftsmen from Suffolk. A special L shaped front pew on the left was designed to enable Mr Paxton of Cholderton House to sit with his back to the wall as he was averse to having people sitting immediately behind him.
The organ was given in 1905 by Mr and Mrs Stephens of the Cholderton Estate together with the then Rector, Revd Brisco Owen.
The font is of Caen stone with an oak cover. The Norman font from the old church is on the left hand side as you enter the ante-chapel.
The stone screen forming the vestibule at the west end is adorned on both sides with the armorial bearings and initials of those associated with the building of the new church. ​
Home | InTouch | Grapevine | Contact us | St Nicholas Cholderton | St Andrew Newton Tony | St Andrew Boscombe | St Nicholas Porton | St Mary the Virgin Winterbourne Gunner | St Michael & All Angels Winterbourne Earls | Editors |